The volcanic history of Iceland is what makes its landscapes fascinating.
Any Icelandic road trip should include stops around some of the impressive lava fields: mossy or still fuming, flat or with huge formations...
Below is my selection of the best lava fields in Iceland with map, tips and photos. About the Lava Fields in Iceland

Iceland is known as the "Land of Fire and Ice". The fire part of the nickname comes from the history of volcanic eruptions.
However, there is little chance you will be able to see a live lava flow (and I hope you don't as being near an eruption is not fun).
What you will be able to see in Iceland, are dried lava fields of various ages, some of the most fascinating landscapes in Iceland.

Because of the high number of eruptions that shaped Iceland, there are many lava flows around the island that have dried with time.
Younger one like Leirhnjukur as still fuming, however older ones are taken over by moss and then vegetation. Nature is taking back control.
All are great to take pictures of beautiful Iceland.

If you are on a road trip around Iceland (see my article to help you plan), you will notice many of them around you. However below is my selection of the best ones you could admire up-close (and easy to access):

Below is a map to help you get oriented and locate them: All my favorite locations are included (with GPS coordinates, map of region and planning tips) in my travel guide eBooks to help you easily plan your Iceland road trip (5 days, 7 days, 10 days, 14 days...) Lava fields are fragile environments.
Make sure to stay on walking paths or roads.
Do not venture on the lava and do not climb formations: the lava is sharp and there can be caves or tunnels below you feet that can collapse at any time (see my list of lava caves you can visit).

Any time you see Hraun in the name of a place, it means lava, e.g.:

#1 - Eldhraun - One of the largest Mossy lava fields in Iceland

Need to rent a car in Iceland?

directly see the best deals on my favorite platform Where to stay in Iceland? See my selection of all the best areas to stay to enjoy the beautiful regions of Iceland...
+ fantastic accommodation options

More lava features as you drive around

Of course, there are lava fields everywhere around the country, with that many volcanoes... but those 5 were my favorite.
Below are a few extra locations to consider adding to your itinerary.

Hofdi is often overlooked when visiting North Iceland, because it is not what they are looking for (trees). However the forested area is not the only things to see. From one of the viewpoints, you can also admire lava pillars in the water of Lake Myvatn.
See my article

Hraunfossar is one of the most unusual waterfalls in Iceland. The Hraunfossar Waterfalls (literally Lava Falls) is made of a collection of gentle cascades emerging from between the lava rocks covered with moss.

Iceland is also home to lava caves and lava tubes. It love entering them, they are fascinating.
The most famous that are open (all year round for some) for visit are:

Check out my article about the best lava caves in Iceland.

In the Central Highlands, you will have the opportunity to see many more wild lava area. However a 4WD is mandatory.
And a driver would be, if you want to adventure off the main roads through the region.

Here you can find a tour with a superjeep and a driver.

In 2017 the Lava Centre museum in South Iceland opened. It is located not far from Mt Hekla, an active volcano that was considered to be the gateway to hell in the Middle Ages.

The arch of Gatklettur

In the village of Arnarstapi, not far from Londrangar, you can see more lava cliffs and the beautiful arch of Gatklettur that was eroded by the elements.

A lot of the famous lava fields remain accessible in Winter.
The experience is quite different. The details of the rocks, the breaks, the moss are not visible anymore.
However the contrast of the dark lava with the white snow is stunning.
Below are a few pictures (and see my Iceland in Winter travel guide):

Where to stay in Iceland surrounded by lava

The Dimmuborgir Guesthouse near Lake Myvatn in North Iceland was one of my favorite stays.
Located right next to the lake and with the Hverfjall crater in the background... there is lava all around. Perfect!
Check out more photos and book 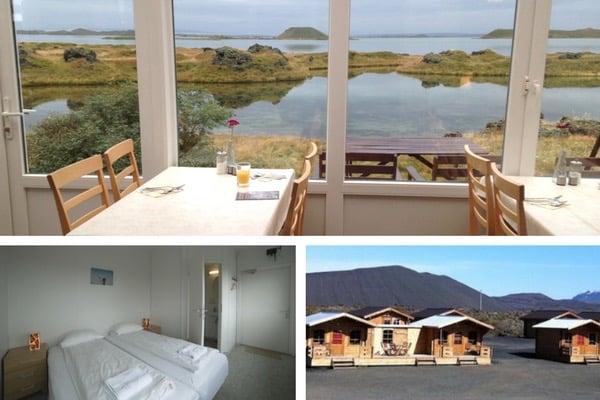 Want to see more of the best Iceland has to offer?

Planning a trip to Iceland?