The village of Zuheros in Andalucia is one of my favorite pueblos blancos (white villages) in the region.
Less visited than the ones by the coast, it offers stunning viewpoints, a castle and a canyon.
Below is my guide to help you plan your visit with tips, photos and map.

// In this article, no ads, no sponsored posts. Just some affiliate links.
// If you purchase through them, I get a commission at no extra cost to you (Disclosure).

Why visit the village of Zuheros?

The white villages of Andalucia are splendid against the mountainous backdrop of the region. There are so many to visit that it can be difficult to reduce the itinerary.
Zuheros requires a little detour from the traditional road trip routes, but I think it is worth it. It was one of my favorite villages because:

The village has around 800 inhabitants.
It is considered, by some, to be the most beautiful village in the World. But I think every region in the world has one of those... Definitively one of the best landscapes in Andalucia.

If believe the picture above must be enough to convince you to visit, but if you need more, below is a short video of what a visit to the village could look like:

Many more photos of the village after the planning tips.

Where is Zuheros in Andalucia? - Map and location Zuheros in Andalucia - Map of location

This highlight (with GPS coordinates and practical tips)  is included in my Travel Guide eBook that helps you early plan your road trip around Andalucia:

How to get to Zuheros

Need to rent a car in Andalucia? My tips: The drive to Zuheros does not present any difficulty. It is a small mountain road but there is one lane in each direction. And the view as you arrive at the village is picture perfect!

Looking for the best place to stay in Andalucia? Walking in the Zuheros white village

The first thing to do in Zuheros is to enjoy walking through the charming streets with white houses colored by plants.

I don't have any special street to recommend. It is fun to just follow your idea. Don't worry, you won't get lost, the village is not that big!
It is a tradition to have potted plants near your entrance. It represents the family.
And it is great for taking photographs LOL!

Compared to others, the ground of Zuheros is not so difficult on the ankles.
The village is quite well maintained and walking around is relatively easy.

Plus, as it is off the beaten path in Andalucia, you can enjoy it by yourself when off season!

At one end you reach the castle. I will tell you more about it in the next section. It is the main attraction of the village.
It is very practical to get oriented.

The village was established to protect the Camino de los Metedores (the Smugglers track).
At the end fo the 9th century, the castle was build and in 1240 it was conquered by Fernando III. It became part of the border with the Nasrid Kingdom of Granada.
In 1293 it was conquered again, and since them it has stayed under the jurisdiction of Cordoba.

Towards the end of the ninth century, Banu Himsi soldiers built a castle on the impregnable rocks, called Sujaira.

In the year 1240, the settlement was conquered by Fernando III, placing the castle under seigneurial jurisdiction and thus strengthening the border with the Nasrid Kingdom of Granada. Alfonso X "El Sabio" gave it to his son, Infante Don Juan, however, following the breach of an agreement, Sancho IV ordered a conquest for the Council of Cordoba in 1293, so the village remains until today under its jurisdiction. Varying lords and their respective houses were in control of the village thereafter, until the abolition of the Señoríos. See more >

And we arrive at the main square of the village. Here you have a magnificent view with the church and the tower of the castle mixed with the natural rocky promontory.

According to the sign next to it:
It is an ancient mosque. Only the base of the minaret remains (now the bell tower).
The Altar piece with the carving of the Virgin is from the 13th century.

The castle has been built on a rocky promontory during the 9th century by the Arabs. They named it Sujayra. This is where the village of Zuheros got its name.
During the 15th century it underwent a Renaissance remodeling inside.
Take the time to admire how it was built around the rocks using the natural fortification to create a stronghold.

There are a few small museums in the village - opening hours may vary.

Museum of costumes and popular arts

The main building at the entrance of the village houses the Museum of costumes and popular arts.
It is only open to the general public at the end of the day on Fridays and during weekends and public holidays.

You can also visit the museum where you will find prehistoric objects found in the nearby cave of Murcielagos as well as ceramics from the neolithics.
It is located opposite the church.
Closed on Mondays

In one of the houses not far from the castle you can find another small museum dedicated to Francisco Poyato. He is an artist with drawings, paintings and sculptures.

Views from below the castle

Next you can explore the fortifications around the castle. It offers splendid views of the region, which is famous for its olive oil.

From one of the platforms, you have a fantastic view of the canyon that I will introduce in the next section.
Zuheros is indeed at the edge of the Subbetica mountain range (Sierras Subbeticas) which is a Unesco Global Geopark (learn more). The Subbetica is made of 14 towns and a large Natural park.

As you can see, there are olive trees as far as the eyes can see: If you are looking for an adventure in Nature, just below the village is the departure point of the hike in Rio Bailon Canyon.
The limestone was carved by the river thousands of years ago.
The trail is a loop. At the beginning you follow the edge of the river with beautiful views of the village and the cliffs.
Then you walk away from the river and into a green valley, spotting the ruins of farms along the way. You finish the trail via a plain full of olive trees.

Below is the entrance to the canyon:

The loop takes around 4h to cover 13km (8 miles).
There is also a shorter loop of 4.5km (3.7 mi) over 2h.
The canyon should be avoided during or after heavy rain.
Other walking trails are available in the area.

Even if you don't go for the hike, you can appreciate the view of the village from above.

The other main interest of the area is the Los Murcielagos caves.
It is located above the village, at the end of road CV 247 (4km from town)/.

It is a cave system discovered in 1968.
It is known for several reasons: 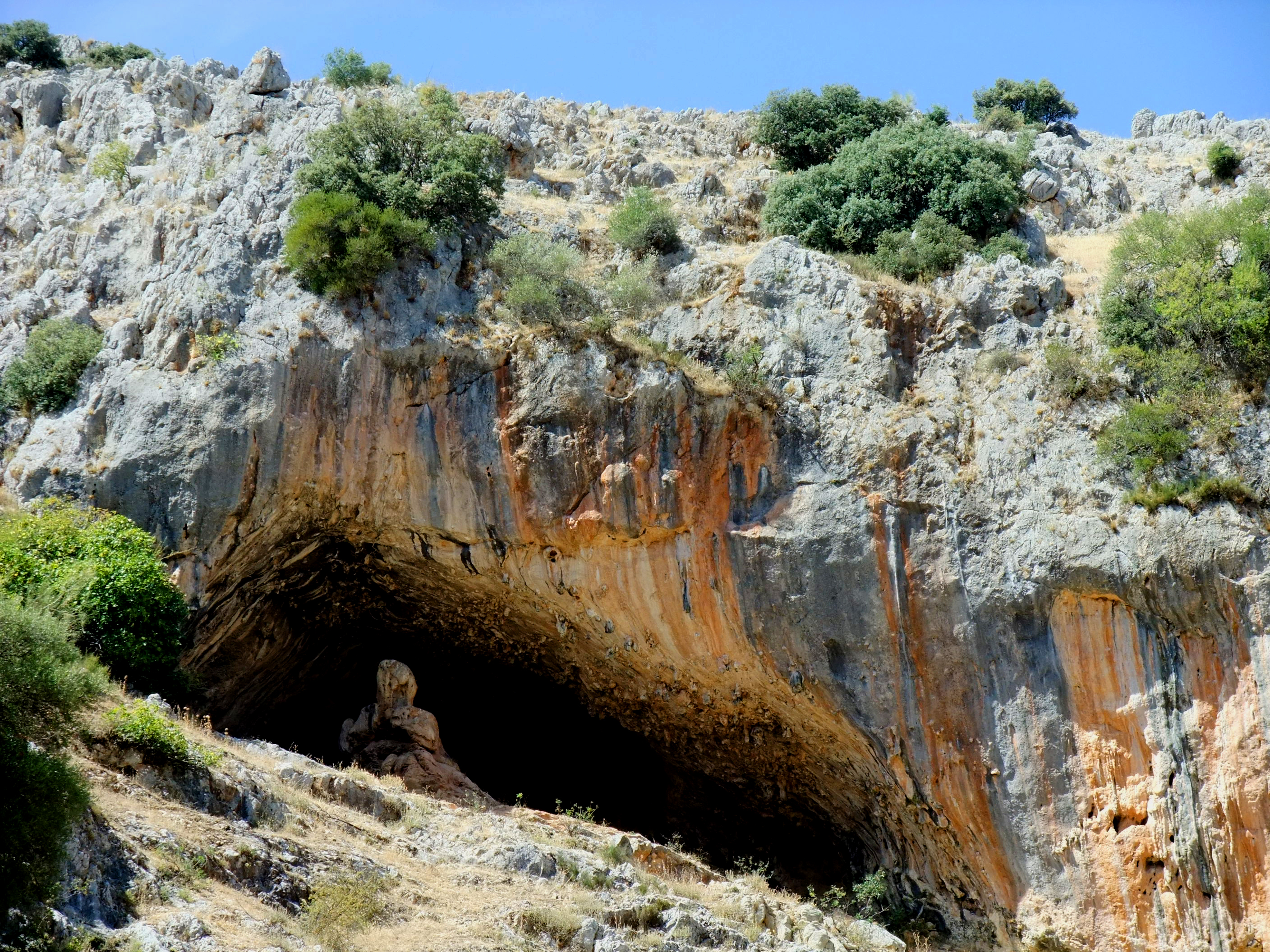 Want to see more of the best Andalucia white villages and other attractions?

Planning a trip to Andalucia?

Check out my travel guide to help you plan your itinerary:

Want to see more of ANDALUCIA

Best things to do in Ronda