The Kyrgyzstan people are the other treasure of the country (apart from the painting-like landscapes): their kindness, their smile and their love for their country. I had the chance that most Kyrgyz I crossed path with allowed me to capture their beauty with my camera. Let me introduce them to you. 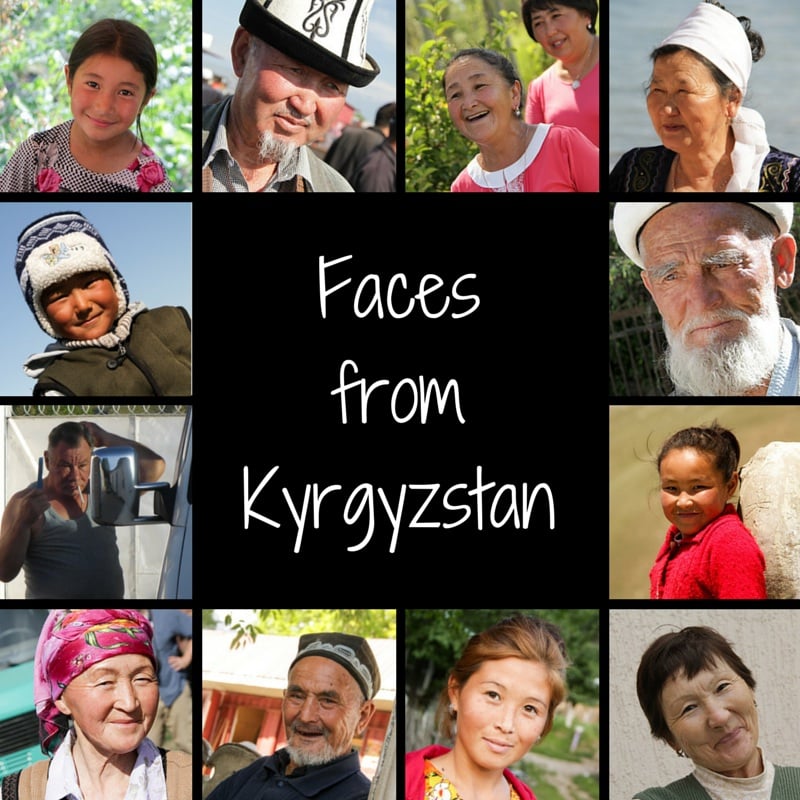 Navigate back to the complete Kyrgyzstan Travel Guide

About photographing the Kyrgyzstan people

This is the first time during a trip that I have photographed that many people. I normally capture only landscapes and sometimes street life. I wanted it to change. It was one of the reasons I booked this tour organized by the blogger Wandering Earl. He is very good at meeting people on his own travels and I wanted to experience it. It did not disappoint. It is one of the reasons I wandered if I should promote the destination as tourists would change everything.

The only limitation was language.​ However you can still exchange a lot with a smile or a sign. The Kyrgyzstan people speak 2 languages: Russian and Kyrgyz. So I learned this very useful sentence: 'Mozhno vas sfotografirovat?' which means 'Can I take your picture?' And almost everyone accepted!

They were even excited. Just don't forget to show them the picture on your screen afterwards. This is one of the reasons I loved traveling in Kyrgyzstan. They have not yet been changed by tourism and interactions are genuine.

If you want to discover more about their culture, check out my post about the Nomadic culture﻿ or the wikipedia page.

You will notice that most people have asian features as those photos were mostly taken in the countryside. However you should know that in the main cities, there is a racial mix with many people from Russia and Bielorussia.

Now let's discover some of them!​

As we were finishing the visit of the Burana Tower, we spotted 2 girls rehearsing their song with the traditional Kyrgyz guitar.They were going to perform for a delegation. At the end, their excited teacher started singing Kalinka and dancing around. She was so happy to share her love for music! (see her in the video in the Burana Tower post)

The head of the family: a strong Kyrgyz woman

On the northern shore of lake Issyk-kul

As we approached the shore of the lake, this woman noticed how I was admiring her clothes. She approached and suggested I photograph her. And right away the whole family wanted to be in the picture. So much fun! The Kyrgyzstan people are always welcoming!

She is the head of a school 70km west​ of Bishkek and, it seems, a very important lady. She was on vacation with part of her family (she has 7 children). They were having their lunch break and of course we could not refuse tasting a little bit of their food: some horse meat and a rice mixture. Not bad!

Altyn Arashan, the valley near Karakul with hot springs

Gennadi was our driver from Karakol to the beautiful valley of Altyn Arashan. There is only one road to go there and it is in bad condition! So it takes 6 hour to hike or 2 hour to drive but only via 4WD.

Our tour guide Masha had told him I had motion sickness and he was worried about me. So sweet! Near the end he stopped to pick some flowers. He gave them to me to smell hoping to make me feel better, but the poor guy just saw my scared face as I have allergies...​

Sellers at the animal market

At the animal market in Karakol

​There were mostly men in the market so the women stand out and without realizing it I mostly photographed them...

We started discussing with many people selling and buying animals (cows, sheep, horses…). We learned a lot about the prices and what makes a sheep or a horse expensive. A fun experience!

Jeti-Ogüz valley, where I slept under a yurt near the river

We spent a night at a yurt camp in the Jeti-Ogüz valley of flowers. It was such a peaceful place, close to the river, away from the other camps. The 2 young women managing it had very strong personalities with their dyed blonde hair.

This lady is their mother. She was very quiet. I had seen her smile at the kids were playing with us and I was really happy when she accepted to join us for a photo session​

The legendary Tamara of the Kyrgyzstan people

A lot of people traveling in Kyrgyzstan by themselves know about Tamara, the guesthouse owner in Tamga. There is not much information about Kyrgyzstan on the Internet, so you quickly end up on Wandering Earl website and his post about meeting Tamara.

And he is right! She is incredible, always smiling, she likes taking care of her guests as if we were her children. She manages in English and shares a lot with us. Plus as we were a Wandering Earl tour, she opened the vodka for us. The cooking is excellent and she just opened new facilities making her guesthouse even more comfortable.​

After spending the night in a yurt at more than 3000m near the Song Kul Lake, I woke up early and walked around our camp.

This is were I met this old men on a donkey and his 2 grandsons. The oldest one was on a horse and already very good at galloping and gathering the animals together. It was incredible to see the tradition being passed on to younger generation!

Sprinter and its owner

Somewhere on the road from Song-Kul to Kazarman

As we were driving, we noticed a group of people milking a horse by the side of the road. So we stopped to see if there were making something traditional. They were not but we got to discuss with the men which were very proud of their horses.

This particular horse is called Sprinter​

The girl on top of the world

A mountain pass between Song-Kul and Kazarman

We made a stop at the 2800 meter high pass (the height written, I cannot confirm). There lived a family during the summer months and the 2 kids ran with us to the top of the hill where a statue was standing. They were very happy to meet foreigners, especially Ariana. And we left them chocolates 🙂

Our driver for the whole tour

After several jobs in security, Igor had saved enough money to buy his own vehicles. He drives people on specific routes in Kyrgyzstan and Kazakhstan and sometimes on tourist tours. He is very proud of his minibus and takes good care of it. He is an excellent driver. I can confirm because we had many occasions to test his driving skills!

​Igor is Russian and lives in Karakol.

The man across the snow

On a mountain pass between Kazarman and Jalal-Abad

What a great timing! We arrived at this mountain pass where there were big walls of ice of each side at the same time as a nomad with its horses and cows. He waved at us and was as excited seeing us and we were seeing them! The moment was so unique!

Arslanbob, the village at in the ancient walnut forest

Look at his glasses. They are attached to the hat to hold.

The people of Arslanbob are very friendly and a little bit more used to tourists (although not really foreigners). I spotted men who seem to have spent all day chatting in the center of the village. We also met a man who was very proud of his car and his 2 daughters.

After discovering the small waterfall, we were waling back and met a group of student who were relaxing after their end of year exams. Not all schools have uniforms, I have been told only the best ones do...

The most beautiful girl

THere is no school from June to end of August in Kyrgyzstan. The children normally help their family. This little girl was with her mother and her brother at their stand selling souvenirs for the many Kyrgyz tourists visiting the area.

I think she is the most beautiful girl I have met during my trip to Kyrgyzstan.​

The Kyrgyz woman on vacation

We were waiting to take a boat trip on the lake of Sary Chelek National park, as were many other families.

This is a popular place​ for Kyrgyz to take a vacation and this woman was waiting her turn discussing with her family.

The women of Arkit

As we were walking around in the small village in Arkit, we met 2 women relaxing at the end of the day. Like most people they asked what we thought of their country. Then came the beautiful daughter of one of them with her freckles. She was stunning.

Discover more planning information, things to do and places to see in my online ﻿Kyrgyzstan Travel Guide. Do you enjoy meeting local people on your travels?