Are you looking for the best view of Paris? Look no further I have found it: from the top of the Saint-Jacques Tower. Access to the roof terrace is limited but well worth the 300 steps to reach it! Let me show you why it is the best public spot to see Paris from above (I still hope to meet a local who has a great roof terrace...) Navigate back to the complete Paris Travel Guide

Built in the early sixteenth century, the Saint Jacques Tower used to be the belle tower of the church called Saint-Jacques de la Boucherie. As I will explain below, its history has been tumultuous. In the recent years it has been restored and since 2013, it is opened to the public but with limited access.

The Saint Jacques Tower is one of the best places to see Paris from above.

Getting to the Saint-Jacques Tower

The guided tour and the tower history

The guided tour starts with the statue of Blaise Pascal (who supposedely did some experiements there). Then we climb to the first level to discover the first part of its story. It all started with a church established by the butcher guild during the middle age. Benefactors, including the 'alchemist' Nicolas Flamel, helped improved the church over time. In 1508 they started building the new bell tower in the flamboyant gothic style. During the revolution the church was destroyed and used as a stone quarry but the tower was protected and sold to a private entrepreneur.

The tower was first restored in the 19th century when architect fixed the based which was not supported by the church anymore. They also restored the facades but took some liberty adding figures such as a siren. The bell was not there anymore so they placed stained glass on the sides. It became an ornemental tower.

Where the bell was

As the rock used for the tower does not face well weather and pollution, the city of Paris launched a major restoration project in 2001 including a lot of research and several years of detialed work. The tower reopened to the public in 2013.

Why it has the best view in Paris

Here are the reasons I truly believe this is the best view in Paris:

Now just look at the picture to get the proof that it is the absolute best spot to see and photograph Paris from above:

Eiffel Tower with the zoom

Conciergerie from the Royal Palace

You can aslo climb the Notre Dame Cathedral Towers to see Paris from above.

Like it? Discover more photos of Saint Eustache church.

The roofs of Paris

The Saint-Jacques tower itself

The tower is surrounded by a nice garden. The first garden created in Paris to copy the London city style.

Even just from outside I find the tower fascinating. Here are the different facades:

And to finish some more artistic shots

Discover more things to do with planning information and photos in my online Paris  Travel Guide. 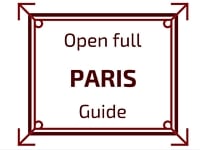 What do you think of this view?