When traveling around Normandy, do not miss the charming village of Saint-Cénéri-le-Gérei. Niched inside a loop of the River Sarthe, it offers old building houses surrounded by greenery. This is a peaceful location that has inspired many artists for good reasons. Below is my guide to help you plan your visit. Navigate back to the complete Normandy Travel Guide

Why visit the village of Saint-Cénéri-le-Gérei?

Saint Cénéri is definitively one of the most beautiful villages in Normandy. And it looks like no other!
It is niched inside a loop of the Sarthe river with sections at water level and others higher, since it is located in the small Mancelles Alps.
The stones houses are surrounded by greenery for a wonderful combination. There is no surprise that it has inspired (and still does) many artists, especially during the 19th century.

Due to its charm, Saint-Cénéri has been awarded 2 labels:

Before I share more about this splendid village, check out my short video. It will give you an idea of what to expect when visiting it.

Where does the name come from?

The legend says that Saint Cénéri, who was born in Italy, was crossing France. In year 659, he stopped along the Sarthe river on a promontory. Tired and thirsty, he started praying. The first miracle was that water sprung up. Then, to cross the river he made the cross sign and the water split. it was the 2nd miracle. With his walking companion Flavar, they built a wooden hermitage near the river and later a small wooden church where the current church is.
The village is named after him for the first part.

The second part is that the location was sought by many people, including the Giroie family. Their name was added.

How to get to Saint-Cénéri

This village is included in my eBook to help you early plan your road trip around Normandy:

Where to stay - Saint-Cénéri hotels and accommodations

Once parked, just go for a walk around the village center.
The old stone houses are well maintained and embellished by plants and flowers. They really make an effort and the streets are beautiful.
Just have a look at those pictures:

As I said earlier the first building was the wooden hermitage by the river in the 7th century.
Then it has been a location source of conflict as many wanted the strategic location: the Vikings, William the Conqueror, the Ambroise de Loré, the Lords to Bellême and the Girois....
There used to be a castle as it was a strategic position. But it was destroyed by the English in 1435. Only part of a wall remains as you can see in the picture below.

This village has had the very first English man elected mayor in France.

Remaining wall of the Saint-Cénéri Castle

Saint-Cénéri has also been a center of interest during the 19th century, as painters based themselves here to be inspired. The village is sometimes referred to as the "small Barbizon" (Barbizon is another village South of Paris famous for attracting artists).
Some of the buildings which where Auberges (inns) at the time, keep traces of their stays: Auberge des Peintres or Auberge des soeurs Moisy.

The current church has a Roman Style. It was built in 1089 by the Giroie family where the wooden church built by Saint-Cénéri used to be (destroyed in 903 by the Normans).
The Bell tower was added during the 12th century.
Modifications happened in the 14th and 19th centuries, especially with the windows.

The church is famous for the beautiful mural paintings, some probably date back to the 12th century, but most are from the 16th to the 20th.
The oldest ones had been covered by plaster in 1650 and were re-discovered in 1828.
The vault is particularly interesting in my opinion. It has been plastered too. But in 1980 it was restored, and 40 musician angels were found on it.

This is one of the most interesting  Normandy churches.

Right next to the church, don't miss the viewpoint! Just climb the stairs and enjoy the narrow path around the building.
From there you can the Sarthe river, the bridge and some of the houses.
The low hills surrounding the village are called the Mancelles Alps. The area is very green and the houses seem to be disappearing in the trees.
I think is one of the most charming views in Normandy.

Travel from home with this puzzle of Saint-Cénéri! 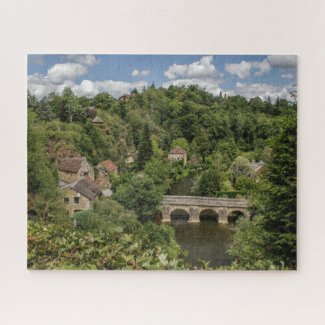 Get the Puzzle of Saint Ceneri village

The original wooden chapel built by Saint-Ceneri does not exist anymore.
However if you keep walking past the church, you will find a chapel in a large field right at the loop of the river.
It was built in the 15th century and it has inspired many artists who painted it. Some of the most famous paintings of it are from René Veillon and Bernard Buffet.

After enjoying the view from above, I recommend walking down to the river level and to the bridge.
If you look up from the bridge you can enjoy a nice view of the church, and the viewpoint area where you were.

If you walk down to the water level, you can see that it is a vaulted bridge with 4 arches. it was built in the 16th century.
In the middle of the bridge you are changing region. To the right you are in Normandy. But on the left you are in Pays-de-la-Loire.

The Gardens and other things to do

In the area around the village you can enjoy:

Things to do in Honfleur